At the multiscreen Subterranean Cinema at Clearwell Caves

The following films were shown in Railway Churn

Roller Coaster with Sound, by the Lomax family, 48 secs.

The following films were shown in BBQ Churn

Remember the Roses, by Colin Bell, 5 mins and 3 secs.

The Beach, by Oliver and Karl Lewis, 2 mins 3 secs.

The Queen of Diamonds, by Abby and Danny Gabaldonni ,3 mins 27 secs.

In the very big sprawling cavern

Euripedes, by Mike May. 3D mapping to speech by Euripedes on greed. 3 mins.

In a tall deep cavern 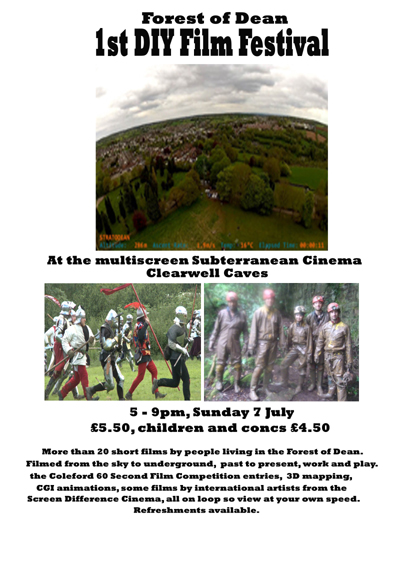 Above pictures from Remember the Roses by Collin Bell, Stratodean by Mark Ireland and Cassie Phelps, and Otters Hole by Edvin Deadman.

To see films by me -