Hands Off Our Forest, HOOF's campaign against the Infrastructure Bill 2014

Hands Off Our Forest (HOOF) is the group that formed in the Forest of Dean to stop the coalition selling off public forests in 2010 through the Public Bodies Bill.  The Infrastructure Bill, which returned to the Lords  in November 2014, presented an even greater threat to the nation's forests because it would have allowed present and future governments to sell any part of the Forest, close footpaths and byeways, prioritise planning consent for development, then allow fracking under our houses and railway lines through our back gardens.

I painted 6 murals for the campaign in 2010/11 and have now started again by painting the third gable in a row in Coalway. 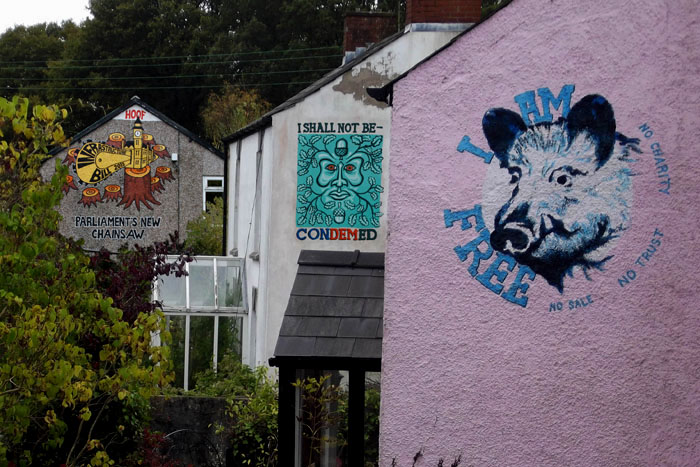 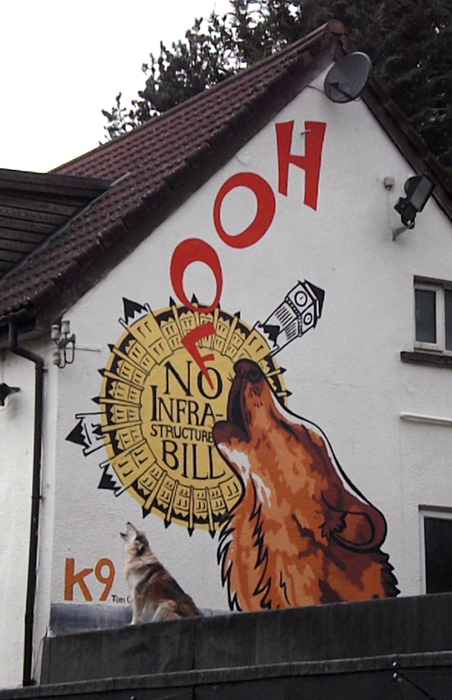 'Howling at the Moon' Oct 2014, painted on the old Travellers Rest pub outside Coleford, now K9 Rescue. Parliament may as well be on the moon, since MPs don't represent the interests of their constituents. Photo by Michele Jones. 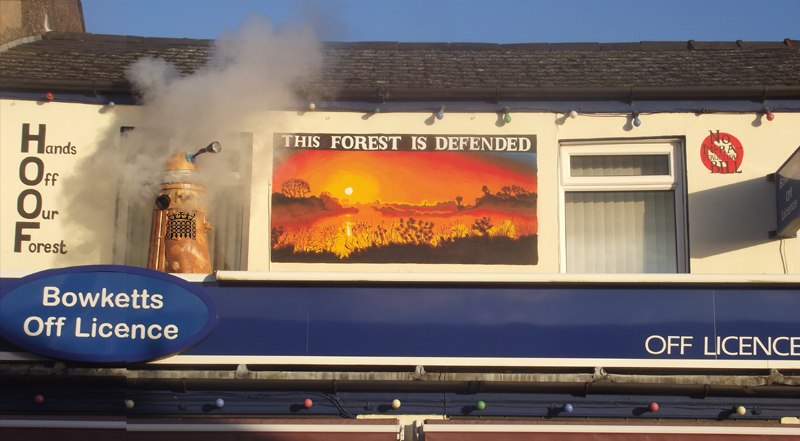 "This Forest Is Defended", photo by Ben Kirkwood.

We shall not sucumb to aliens from parliament.

The local media had been resisting covering HOOFs protests concerning the Infrastructure Bill, but finally caved in and printed long articles with the mural photos as pictures for them. ITV South West came over to film the murals and then stayed to film HOOF representatives and a lantern procession of 400 at Mallard's Pike on 5 November as the Lords discussed amendments to the Bill. 38 Degrees also sent in a 300,000 signed petition. The Govt U turned and said they would write an amendment concerning the Public Forest Estate rather than accept HOOF supported Jan Royal's amendment.

The amendment appears to exclude the Public Forest Estate from 'transfer' or sale. The tragedy is that this means HOOF can no longer oppose the Infrastructure Bill now the woodland threat has been removed although this was possibly the least offensive part of the Bill. Half of it is about enabling fracking which is diabolical, but probably only coming to the Forest of Dean once the rest of the country has been wrecked as it's thought the geology unsuitable. Good luck to everyone between Hampshire and Lancashire, get your banners and road blocks ready.

However HOOF will shortly begin campaigning for a new bill to protect and develop the Public Forest Estate, as promised but never delivered by the govt after the overturning of the Public Bodies Bill in 2011. New murals will be appearing shortly, and parliament will be hearing more on the matter.