Paintings of a photo of the Town Hall as was, how the town centre looked in 2005, and a payslip for it's original creation from King Charles II. 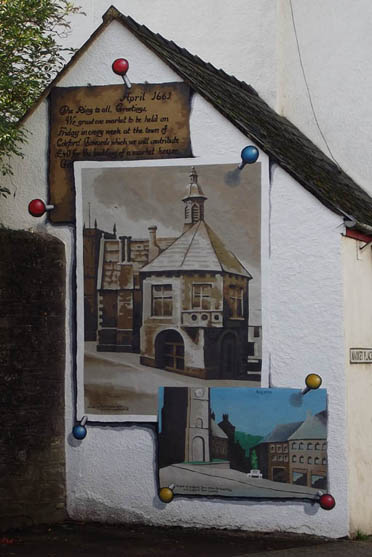 Repainted mural 2019.
The town hall was knocked down in 1968 and a lot of people still remember the old building and still feel very strongly about its destruction. Coleford also had a rare octagonal church which was knocked down in 1882. Coleford would have had a unique and historical feel to it had they remained. The lonely tree planted where the town hall was has now grown quite a lot. 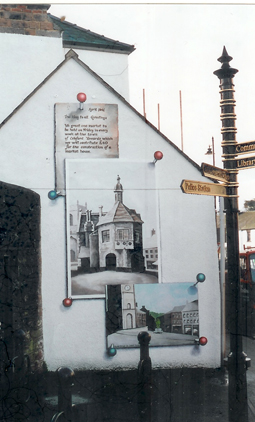 In 1968 the Town Hall needed a roof repairs, and it was felt by those in power that it was getting in the way of buses as well so it may as well be knocked down. 1968 was probably the age of the buses zenith, their numbers have been dwindling ever since.

I believe the diocese knocked down the original octagonal church because it was too small. Ever since congregations have shrunk and now the new church is about to be knocked down because it is too big and expensive to run and maintain.

I was very pleased with my original painting of the photo of the Town Hall (this photo wasn't very flattering), but what the new painting may have lost in subtlety I think its gained from being bigger (size matters in mural painting). I prefer the look of my new layout.

I'm very much enjoying getting the chance to repaint murals a decade or more later. It seems I'm a bit competitive with my younger self and find it very reassuring if I feel I do as well or better, (which to date has always been the case), but I'm guessing I'll be supremely demoralised if I do worse one day.